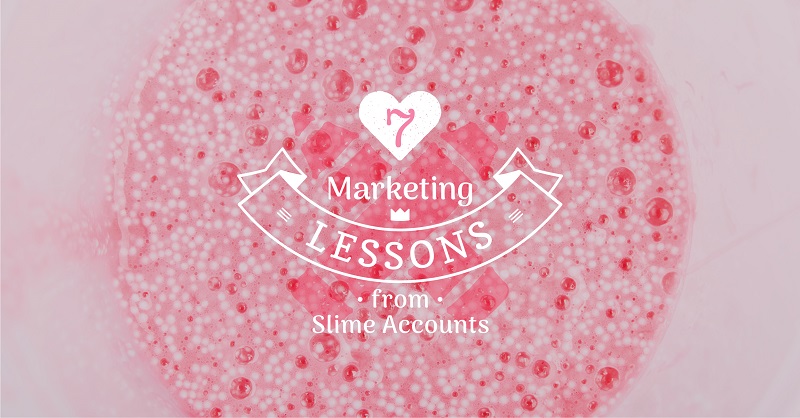 If you’ve been on Instagram in the last 12 months, you know slime accounts are bigger than ever. These cute cheery feeds of crunchy or poppy videos starring colorful sticky substances draw in hundreds of thousands of views. Just last year articles on the booming popularity of slime accounts appeared in Fortune, Inc, New York Magazine, The New York Times, Time, and Vice. 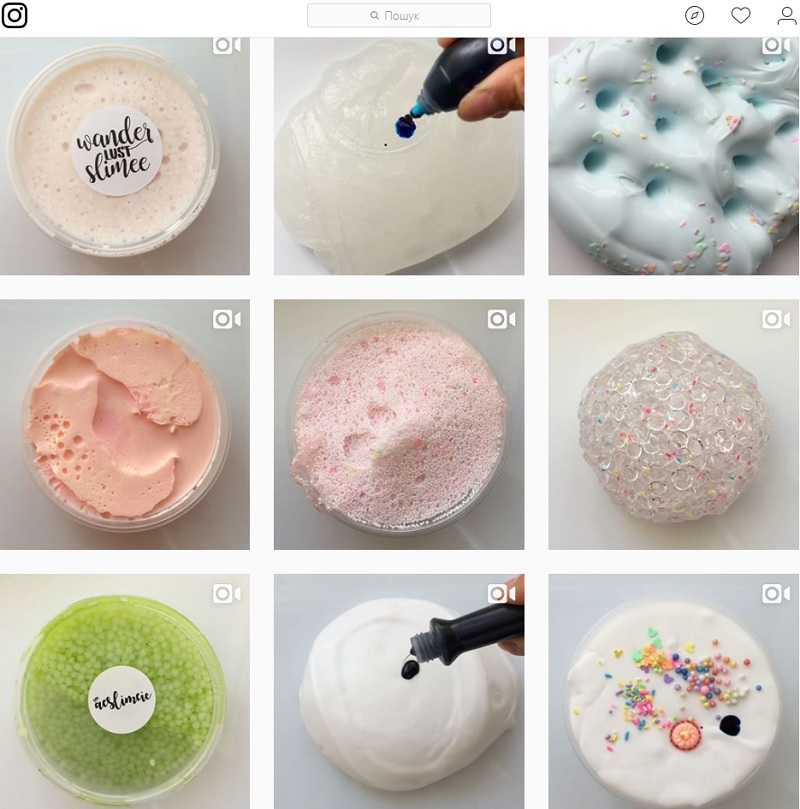 If you are thinking slime is just a useless fad, think again. Slimers don’t just make sticky goo and film videos of it to post on Instagram, they manage to actually sell it. Granted, it’s just a thousand or two dollars total for most of the mid-range accounts with production costs often amortized by the parents (slimers are prevailingly teenagers), but the ability to spin some clay and glue into some sort of a business model is pretty genius. What makes it work?

It’s difficult to know for sure, why people are drawn to slime videos like bees to honey, but judging by the hashtags often used by these accounts, the answer is somewhere between ‘satisfying’ and ‘asmr’. Slime videos aren’t just a product demonstration, they are a product in and of themselves, and a free one at that.

Recorded in a way that is designed to trigger the so-called automatic sensory meridian response – not a scientific term yet, but subject to some recent scientific research, as well as praise by hundreds thousands of consumers, including yours truly, – these videos feature a collection of pleasant subdued sounds intended to cause ‘tingles’. Users watch videos to relax and slow their minds, while at the same time being exposed to the full range of products offered for sale by the slimer.

2. Make good use of the scarcity principle.

The less product is available, the more desirable it appears. Slime accounts know that well and keep releasing their slime in small batches, preceding each release with an extensive teaser campaign – previewing featured slimes on their page and in Stories, asking followers to name some of the slimes or request scents, colors and ingredients (usually plastic or foam additions like beads or small squishy cubes), eventually announcing the scheduled release time down to the minute.

Most accounts have an Etsy shop or self-hosted online shop to sell slime, and popular slimers appear to be perpetually sold out. With prices at just around 5 to 10 bucks per jar and hours of watched videos of product demonstration under your belt, slime starts to feel like a fun impulse buy. 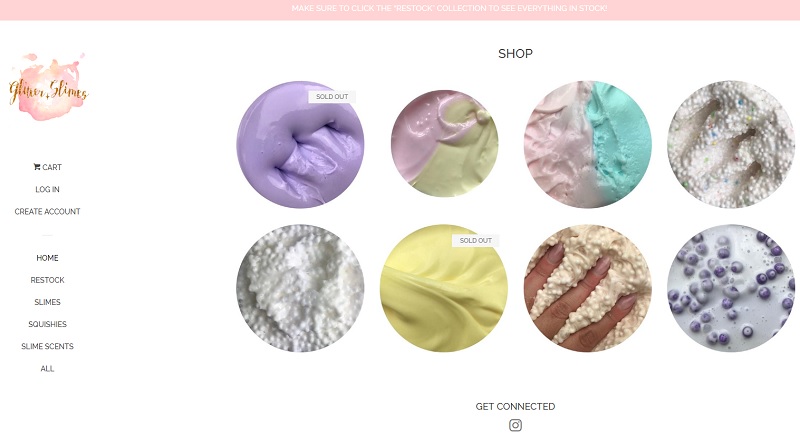 When it comes to be conscious of their medium, most slimers know exactly what they are doing. According to 2013 study by a marketing platform Curalate, less saturated images (0 to 15 percent saturation) posted to Instagram on average get 18 more likes, while lighter posts receive 24 percent more likes than their more saturated and dark counterparts, respectively. Now review some of the popular slime accounts and you’ll see just that – light, minimally saturated, soft feeds: 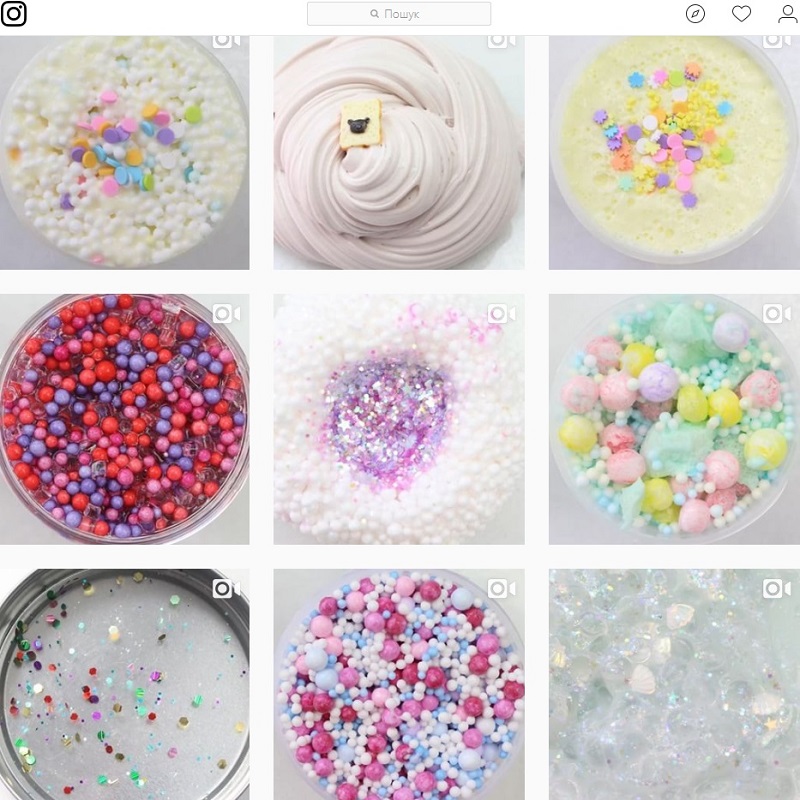 The look fits the slime brand like a glove – just a quick glance, and you feel at least a little soothed and relaxed. With a sprinkle of carefree fun on top – you got yourself a perfectly enticing social media presence. Use one of similarly hued Crello Instagram templates to recreate the look.

Slimers know their power is in organic search – people actively look for slime videos, meaning carefully researched hashtags result in a steady influx of new potential customers and subscribers. Slimers refrain from using spammed hashtags – those not only decrease chances of a post being seen by more users, they are also heavily diluted with irrelevant posts, – and include less obvious but still popular hashtags, like #slimeee.

5. Get to know the customer.

In their captions, slimers like to ask their audience simple trivia questions like what’s your favorite lemonade flavor or type of chocolate. Everyone likes to talk about themselves, so questions like this lead to hundreds of comments = great engagement. Here user liyaslimes is seen asking followers about their go-to snack and in a post several days prior the account called their followers to “comment your initials and find your twin!”

Note the language used in the above post – that’s your typical slime account lingo that’s indistinguishable from conversations people are having with friends and loved ones in chat and social apps. It feels an integral part of the informal, emoji-infused, heavily abbreviated and slang-filled colloquial conversation that people are having with the people they actually know and like.

That association makes these accounts feel kind of like home – chill and idle, and exactly on brand.

This might sound crazy, but videos about glittery slime have recently started to become a little mysterious. This is what it usually looks like: 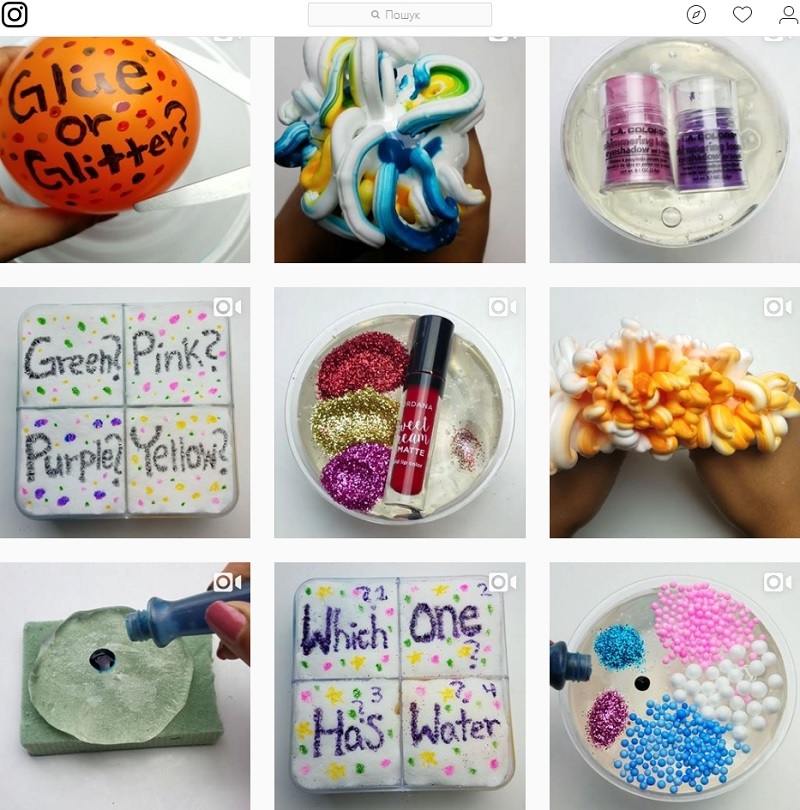 In short, slimers now ask the audience to guess the color of slime under the crust (an #icebergslime, in case you were wondering) and proceed to poke each section to show the curious audience what’s inside. With the views counter on the ‘Which One Has Water’ post on the center bottom in the image above currently at 1,318,604, this mindless fun seems to be precisely what the people are craving.

Slime accounts have demonstrated their ability to go past a couple of months long fad and turn a hobby into a small business by having a deep understanding of their market and adjusting own Instagram presence according to the most current trends, which makes me confident that the listed lessons are just the tip of the iceberg of what marketers can learn from the global phenomenon of slime accounts.

There might not be too many super famous slime shops yet, but if you feel like digging up more slime marketing gold, check out these popular slime accounts with 480 and 712 thousand followers, respectively: slimeyoda and waveslimes.

previous post
Alignment, Grouping, Object Colors, and More Editing Tools You’ve Been Underusing
next post
Everything You Need to Know to Ace Instagram Stories for Business
Related Posts
Martin Benes: I Make Dreams Happen May 21, 2021
How to Design Newsletters in 2021 May 14, 2021
SMM Trends in 2021: How to Promote Brands... May 11, 2021
Graphic Design for Small Business: How to Stand... May 7, 2021
Influencers, Podcasts, Clubhouse, but How to Really Get... May 1, 2021
How to Feel Energized if You Sit at... April 28, 2021
Crello
Tools
Discover
Partner
Legal
Help
English
English (EN) Russian (RU) Português (PT) Deutsch (DE)